WordEx is a word game. The idea of the game is to build words by taking tiles from the playing field. Only the top tile of each column can be used. 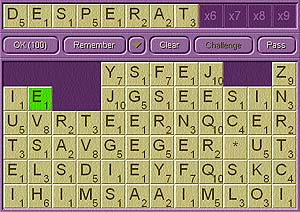 You have a limited amount of time available per move and usually should compose one word during that time. The more points your word weights (shown in parentheses after OK button) - the better. By default the time not used during a move is not carried over to the next move. Thus you should take the full advantage of the available time and make the best possible word. You may use Remember button as an aid. When you compose a word press Remember button. It will remember the word and clear the field to allow you to compose another word. You may see the list of all the words that you composed during that move by pressing down arrow button. It lists the words according to their weight. Once you are done finding words you may select a word from that list and click OK to confirm it. If the word is not accepted (it fails dictionary verification) you may select the next word in your list and so on.

Defines the number of columns and their height. The wider and higher the playing field is - the easier it is to make longer words, and it's usually more fun to play on a big board.

The bonus that you receive for making longer words can be either +5, +10, +15... or x2, x3, x4.... This means that if you make a 5 letter word you will either get additional 5 points bonus or have the weight of your word multiplied by 2. Multiplication option generally stronger encourages making longer words.

The players can make words either in turns or simultaneously. Making words simultaneously is a more fair option, because all players at the table have the same playing field and the one to make the better word takes advantage. When making words in turns the outcome quite seriously depends on luck, because you may get a good or a bad playing field. At the other hand this option allows for a strategic thinking because while making your word you should also consider what letters you are leaving to your opponent. Also with this option you can challange your opponent during their move, if you think you've found a long word and believe your opponent will not be able to find a word of that length.

This shifts the playing field up one row after all players make N moves. It's a usefull option and usually provides for a more interesting game.

Optionally you may configure your game to allow making more than one word per turn. If enabled the weight of all words made during the turn is summed up. This is fun. Although it may seem that this option doesn't encourage makeing longer words it's not really that way. When making multiple words you can make a smaller word to open up letters that you need for a longer word. It becomes a strategy game! A very interesting game can be played if you select "simultaneous" in making words, "Multiple words per turn" and set a long time limit (for example, 600 seconds). With these options during one move players should be able to use almost all tiles at the playing field and the player who extracts the most points out of a given playing field will win. And certainly the player making many shorter words will lose against the player making few, but longer words.